Inspired by my friend Homare Ikeda, I have started doing a drawing a day – usually a portrait, usually directly in pen-and-ink or pencil. Here are a few of the drawings I’ve done this month. 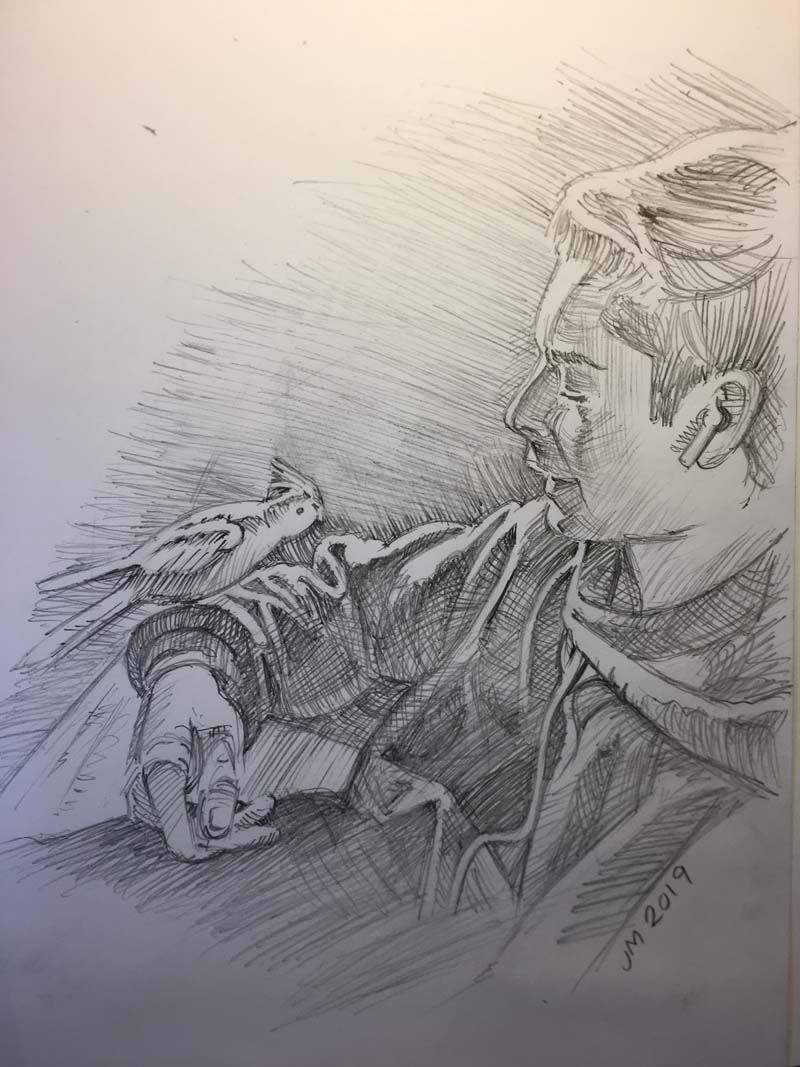 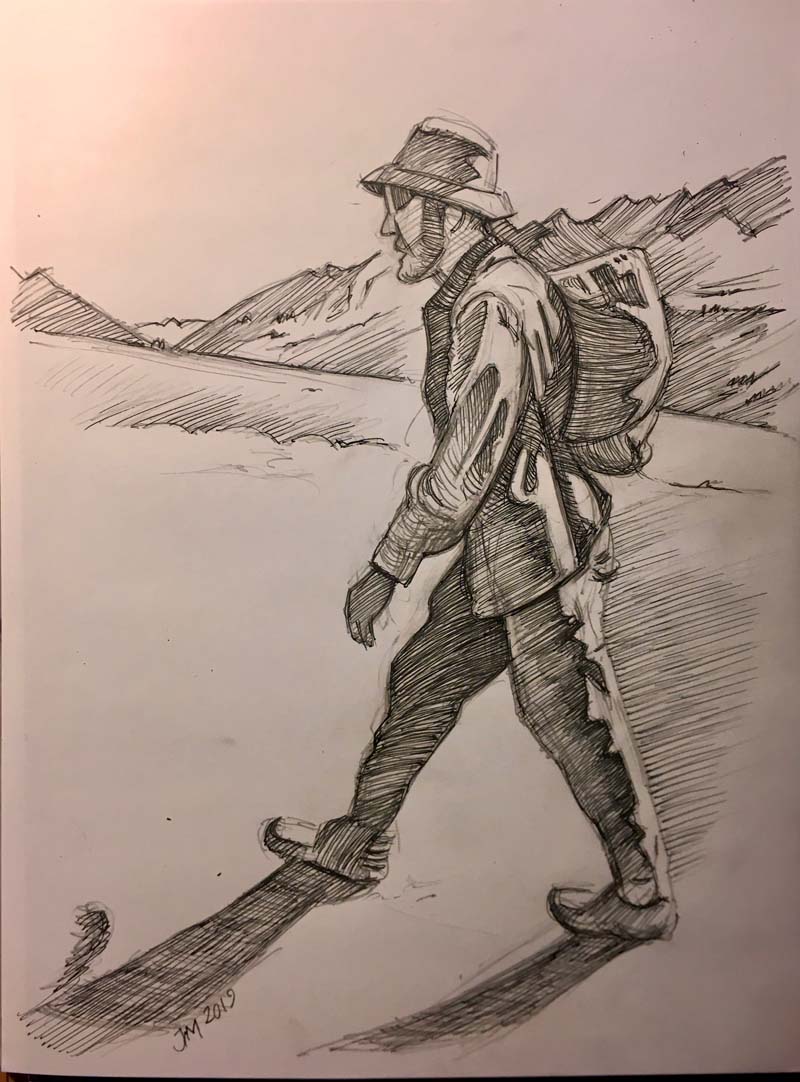 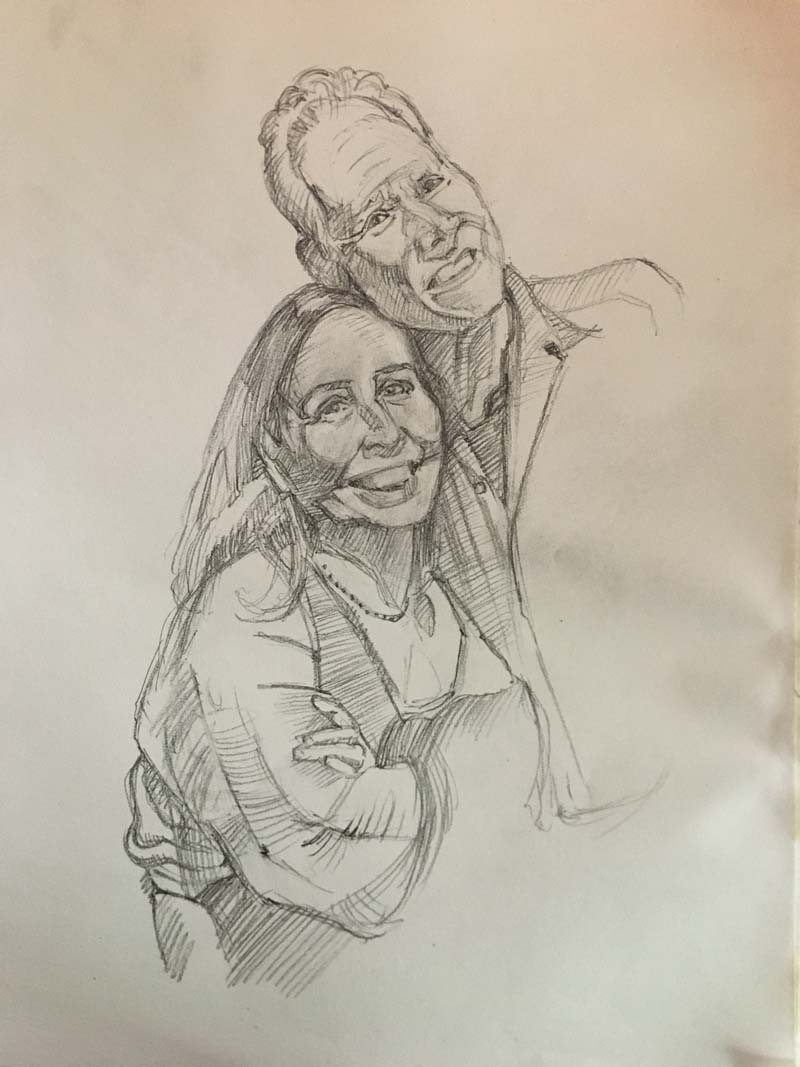 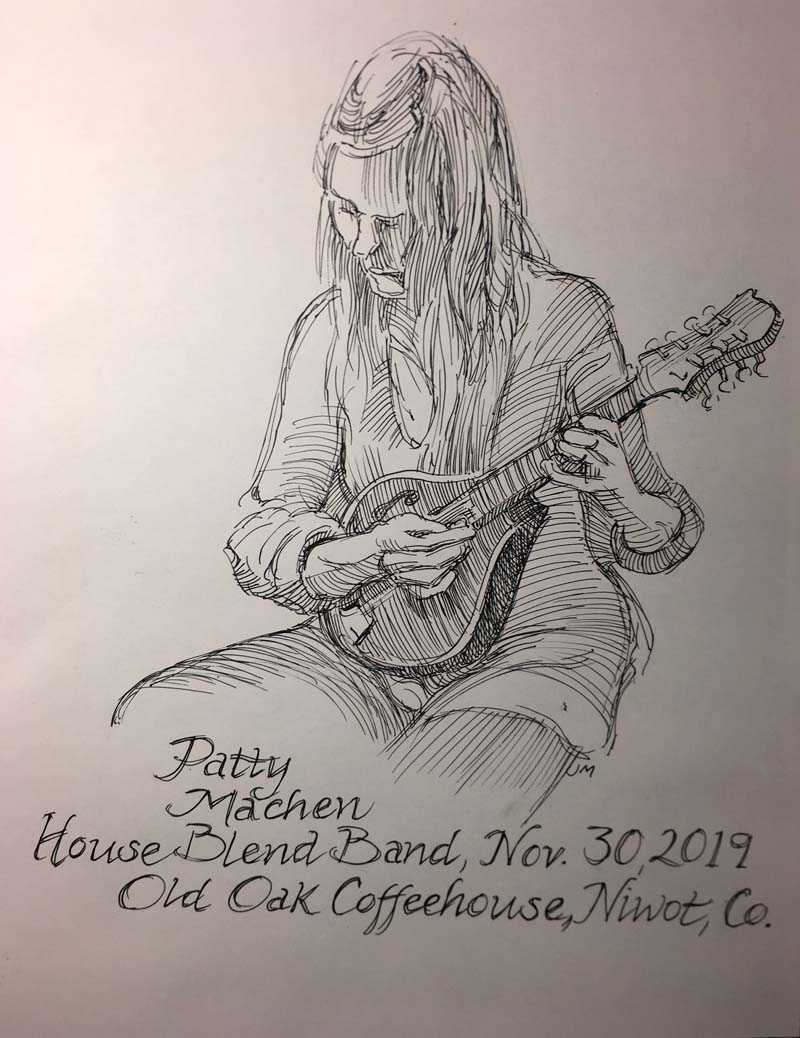 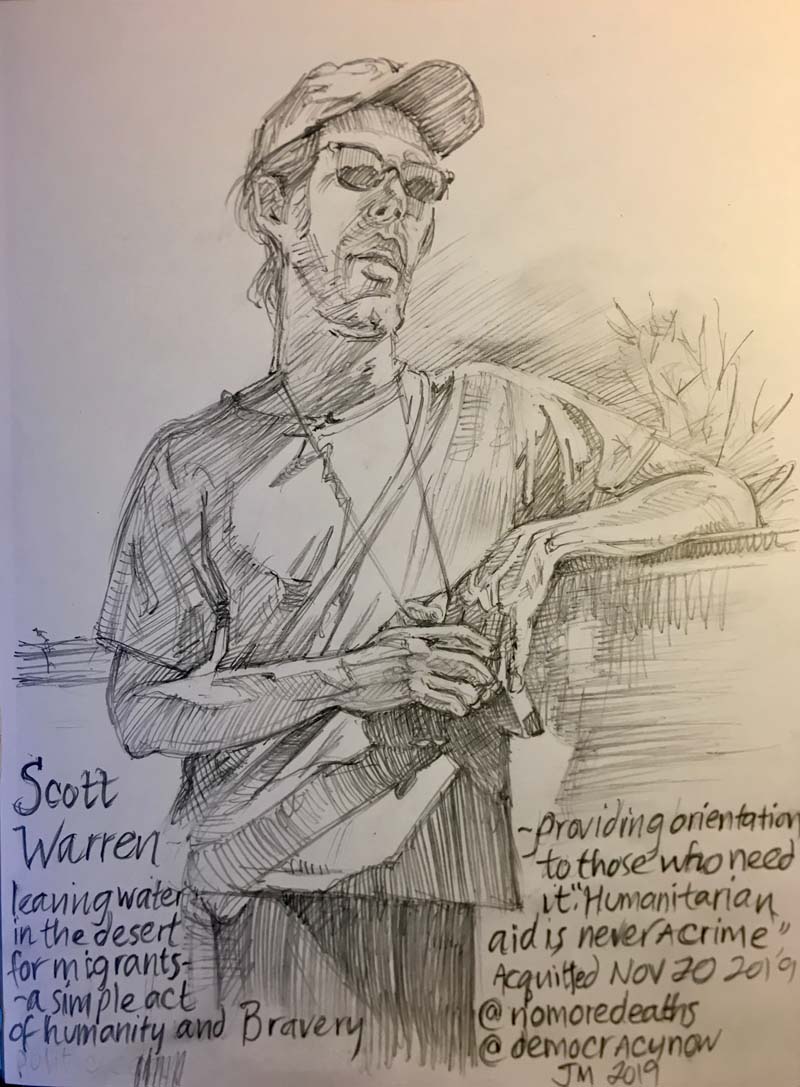 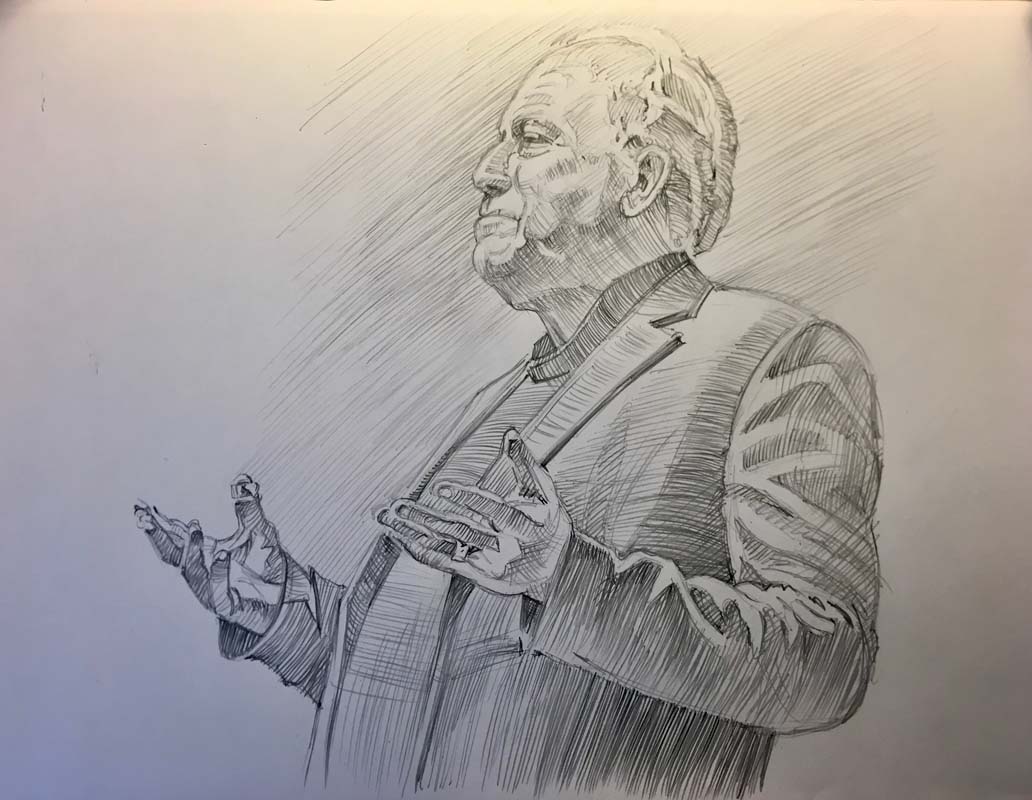 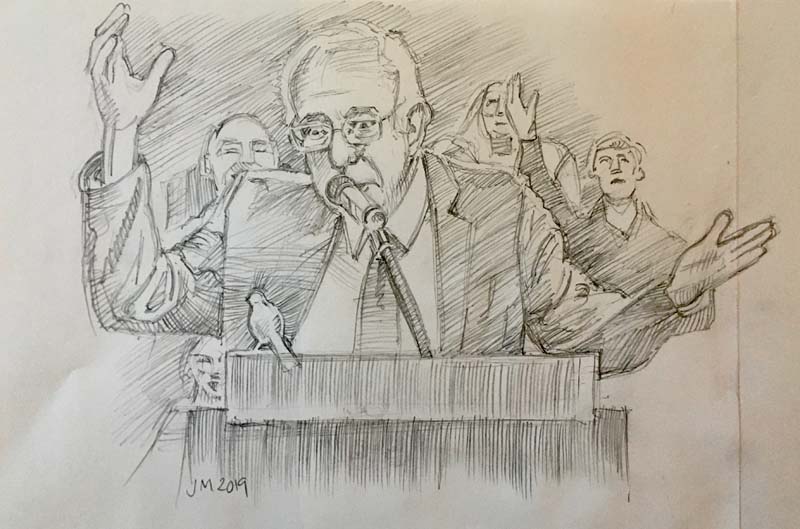 Birdie Bernie Sanders – from his famous speech when a small bird landed on his lectern. 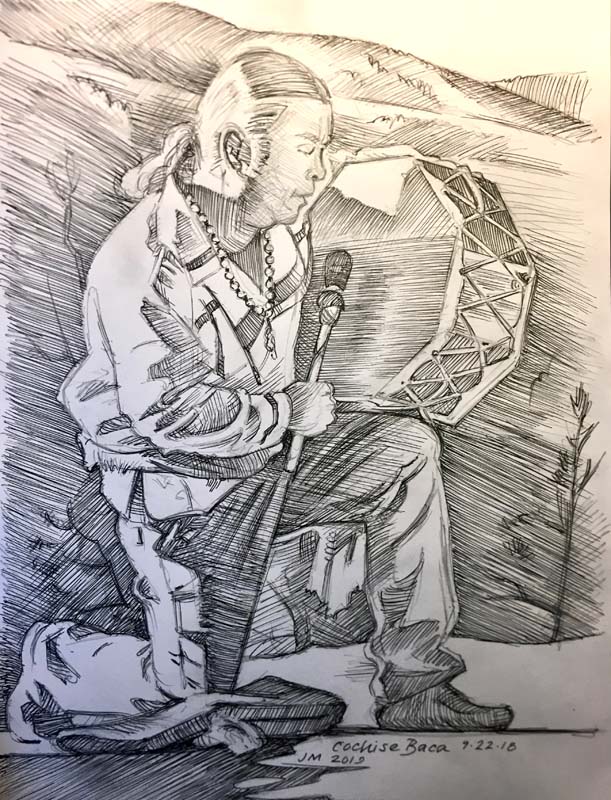 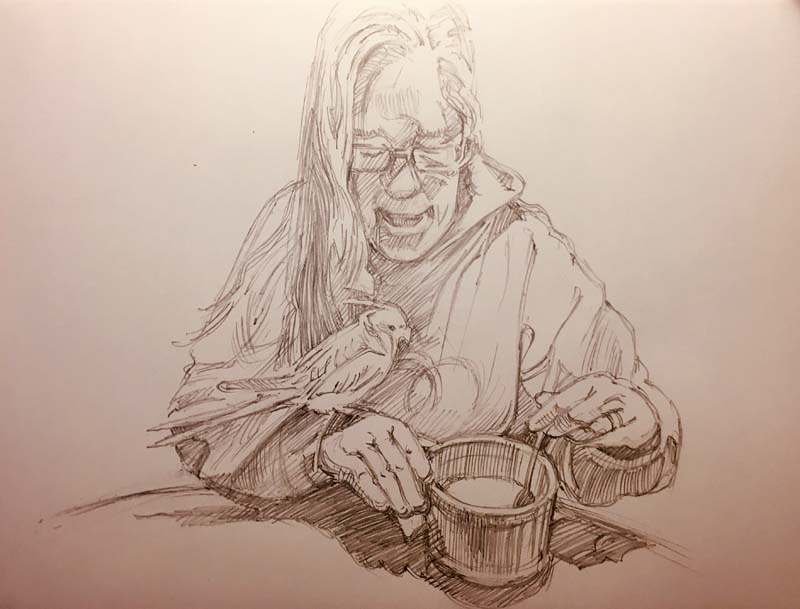 Paige, Rio and Bowl of Grits 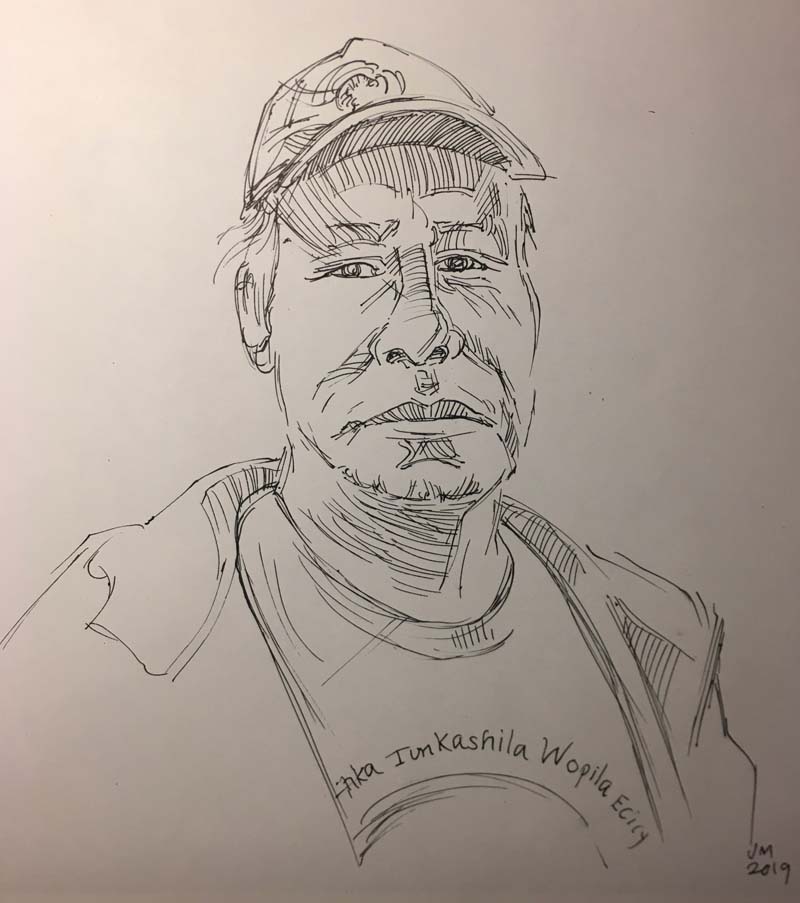 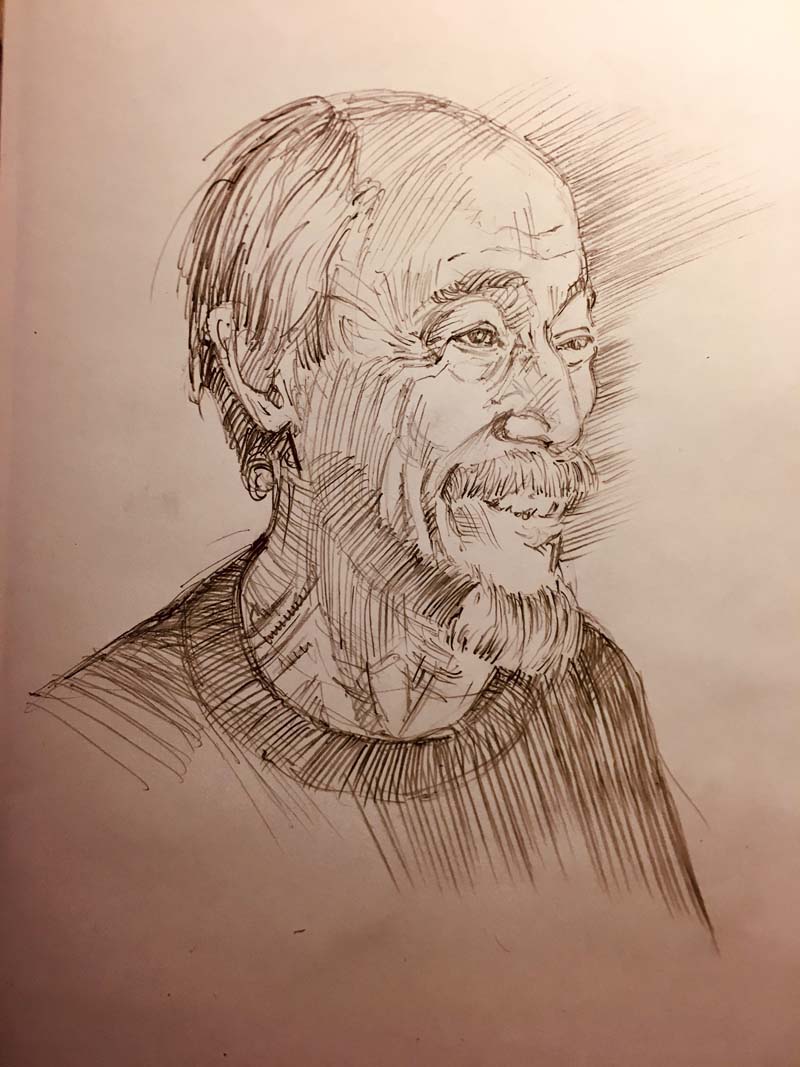 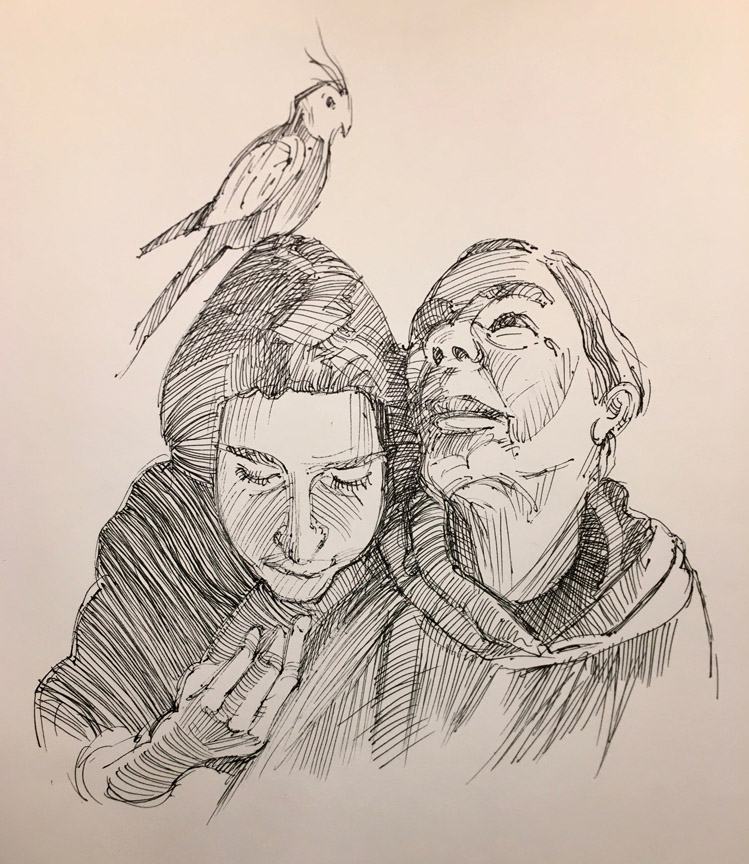 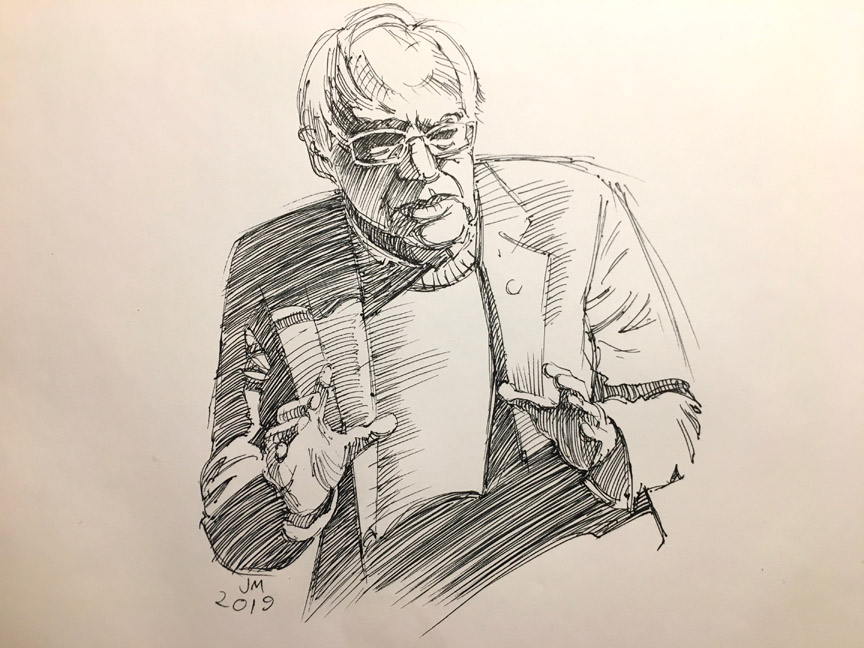 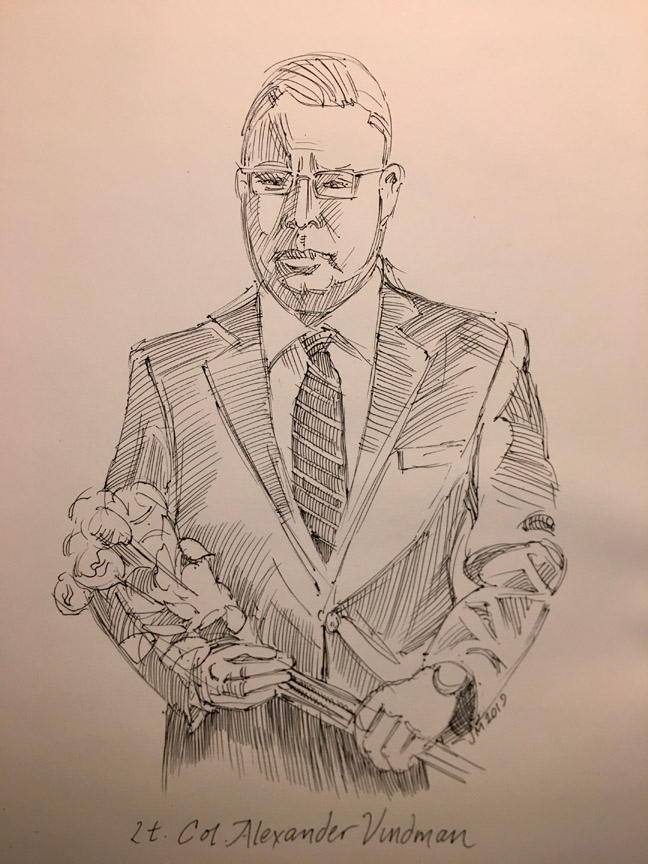 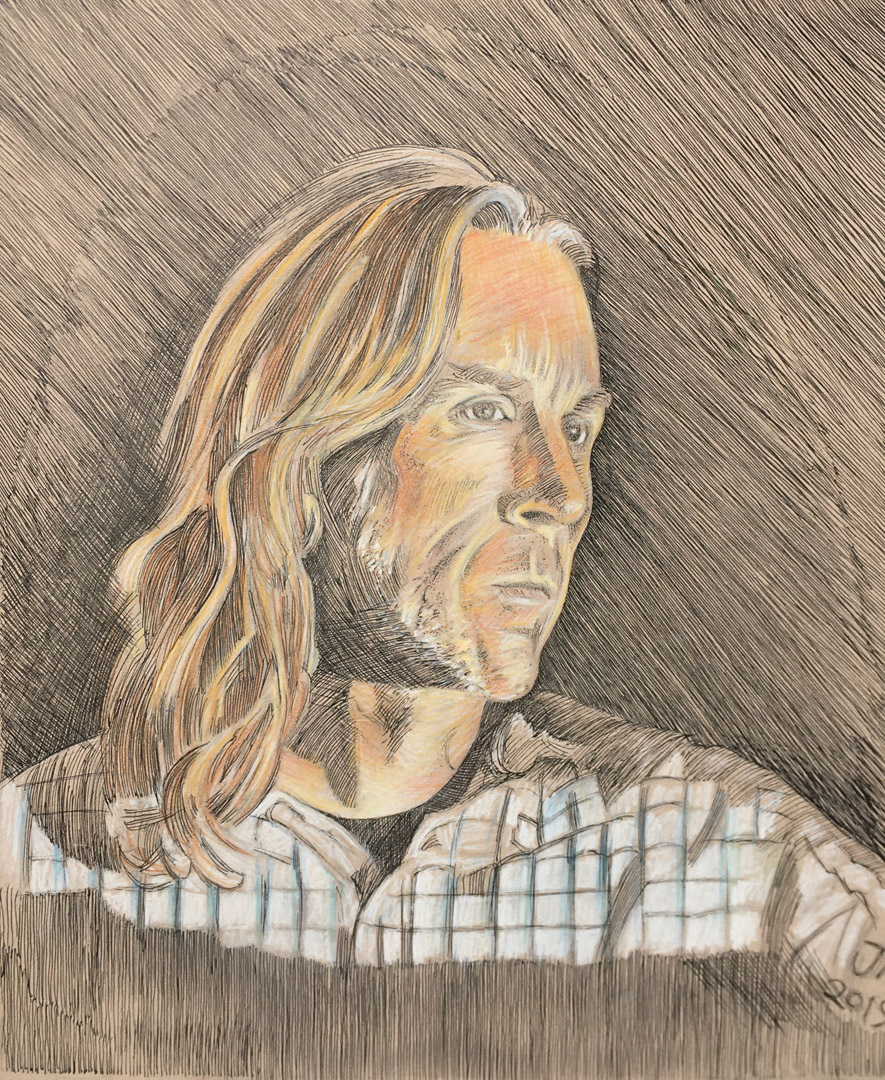 Boulder has been Jonathan Machen’s home since he arrived from Los Alamos, New Mexico as a freshman at the University of Colorado in 1982. As a studio art and art history major, Jonathan studied with Clint Cline, Frank Sampson, Chuck Forsman and Garrison Roots while also sketching and painting on his own, which has continued up to the present day.

“Boulder Through the Decades”, comprising over 40 works in oil, watercolor, pen-and-ink and plein-air pencil and chalk studies, is a wide-ranging artistic study of Boulder’s natural and architectural environment. A love of both architecture and nature has inspired Jonathan to sink deeply into both the natural and the human environments found in Boulder. In this show Jonathan has selected many studies and finished works of architectural gems that define Boulder, as well as a number of lesser-known locations, with perspectives mostly gained by exploration on bicycle or on foot.

A few works in the show depict Machen’s home in Fourmile Canyon on the outskirts of Boulder, where he has painted and drawn in all seasons; and one work, “Unite With Love”, depicts the Womens’ March following the 2016 Presidential Election in Denver, the only overtly political piece included in the show.

On March 27, 2019, I sketched the historic Post office in downtown Los Alamos, New Mexico, built in 1948 on the site of the old Ranch School Trading Post. I set up my easel at the front of the building, and over the space of a few hours did two drawings as the afternoon sun cast long shadows on the interior of this fabled structure with it’s stunning circular thunderbird motifs, set in metal inlay  over the windows. One of the photographers for the Los Alamos Daily Post, John McHale, came by while I was working on the sketch.  I did two drawings on site and had engaging conversations with folks, including friends from as early as 1st grade. 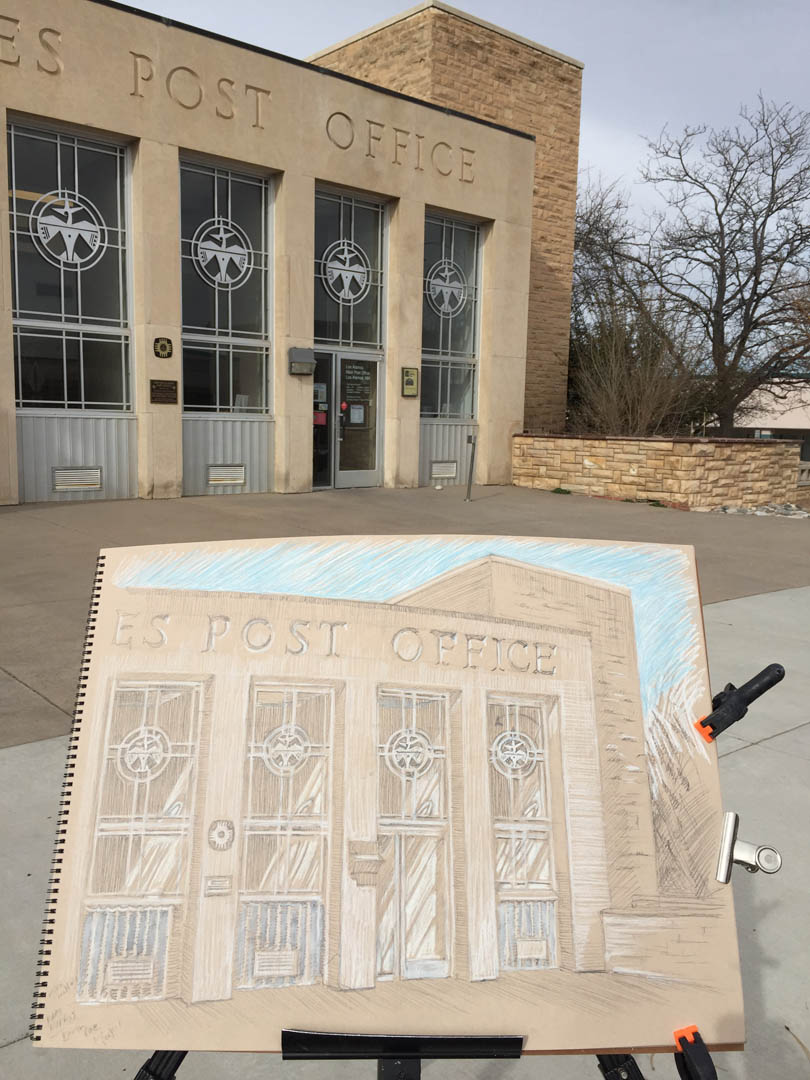 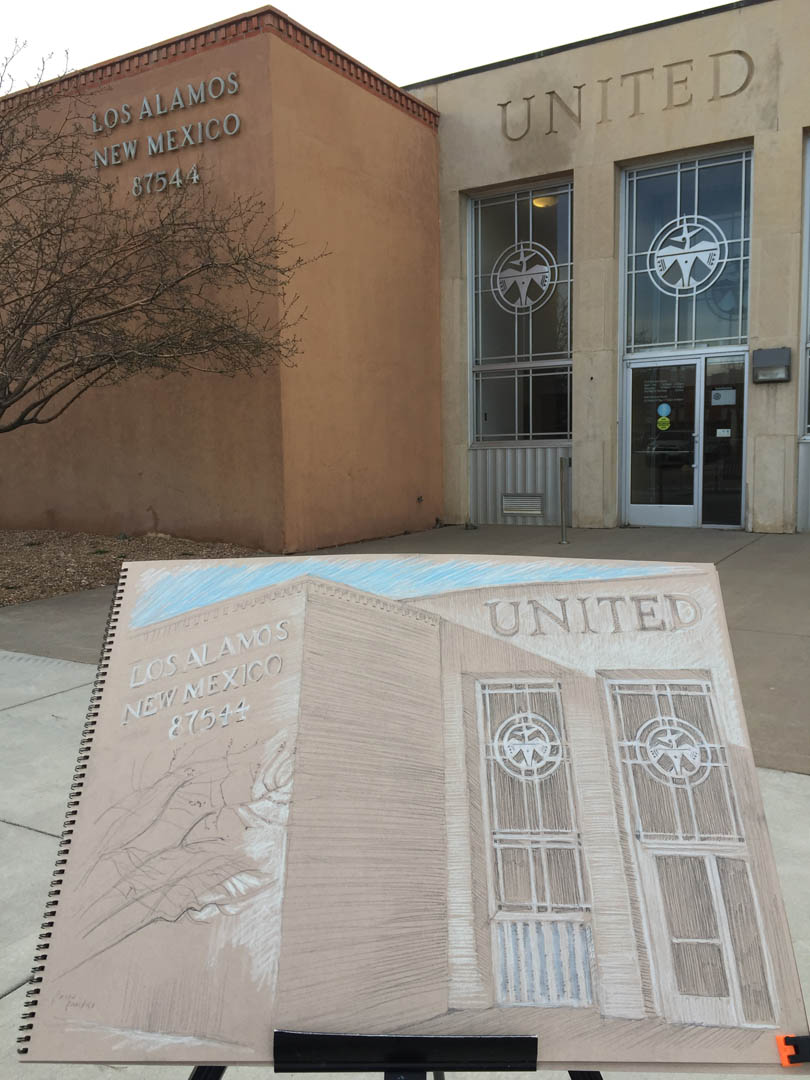 Two of my prints of Boulder’s Dushanbe Teahouse are going to be part of the US State departments “Art in Embassies” program, and will be displayed in representative John Pommersheim’s residence in Tajikistan. I just finished making the frames.

From the State Department: Art in Embassies’ exhibitions are assembled with generous loans from artists, museums, galleries, and private collectors.  The exhibitions extend for the length of the ambassador’s tenure, which is usually about 2 1/2 -3 years.  The works are installed in the representational spaces of the residence, where many of the ambassador’s official functions are held.  We insure the works from the time they leave their owners to the time they’re returned.  We cover the costs of all shipping, which is carried out by professional art handlers.  We also publish a full-color catalog of each exhibition, as well as include text labels for each work in the exhibition.   By creating cross cultural connections through visual art, we seek to achieve a kind of visual diplomacy.  You can learn more about AIE at  https://art.state.gov/ 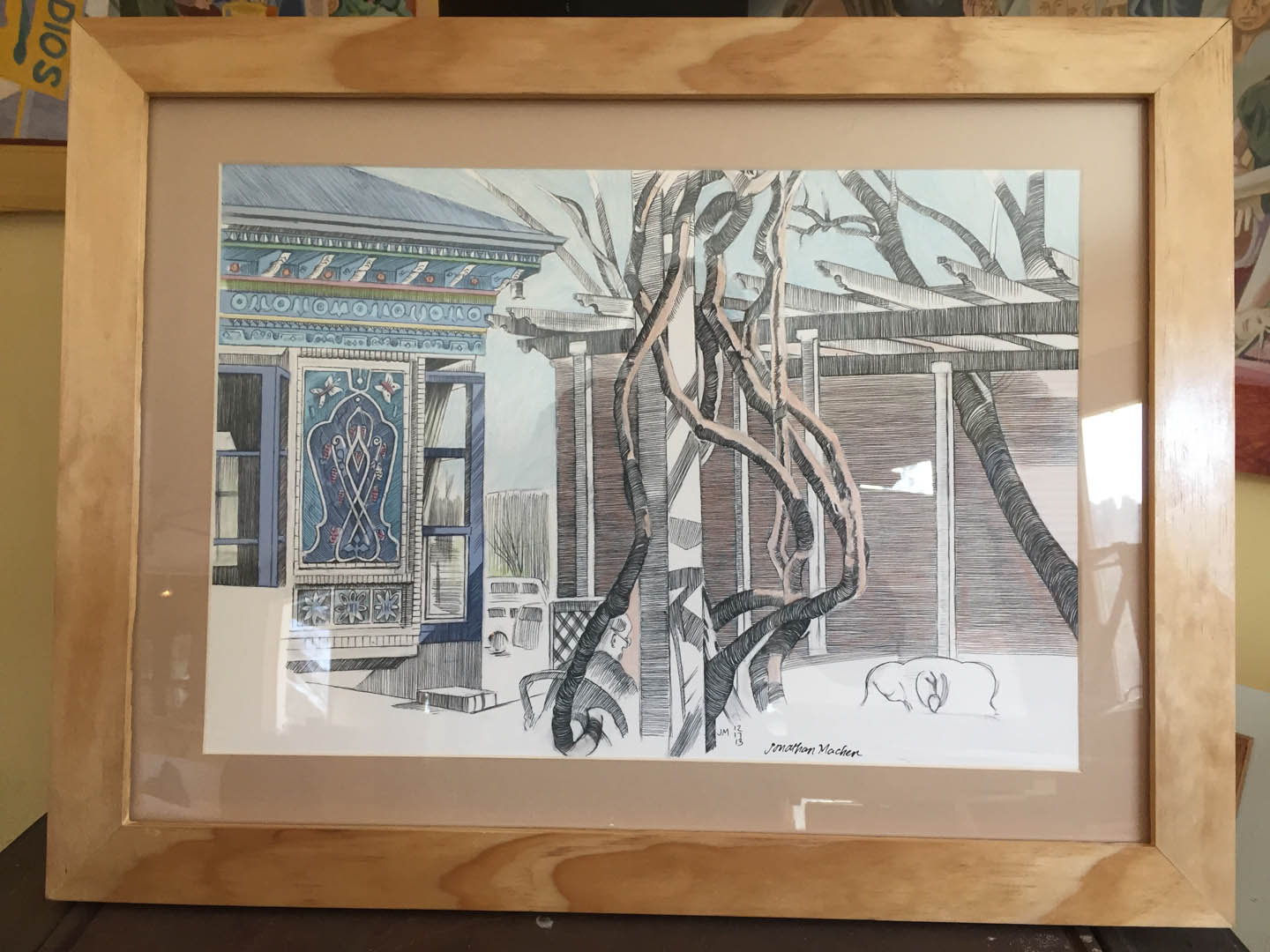 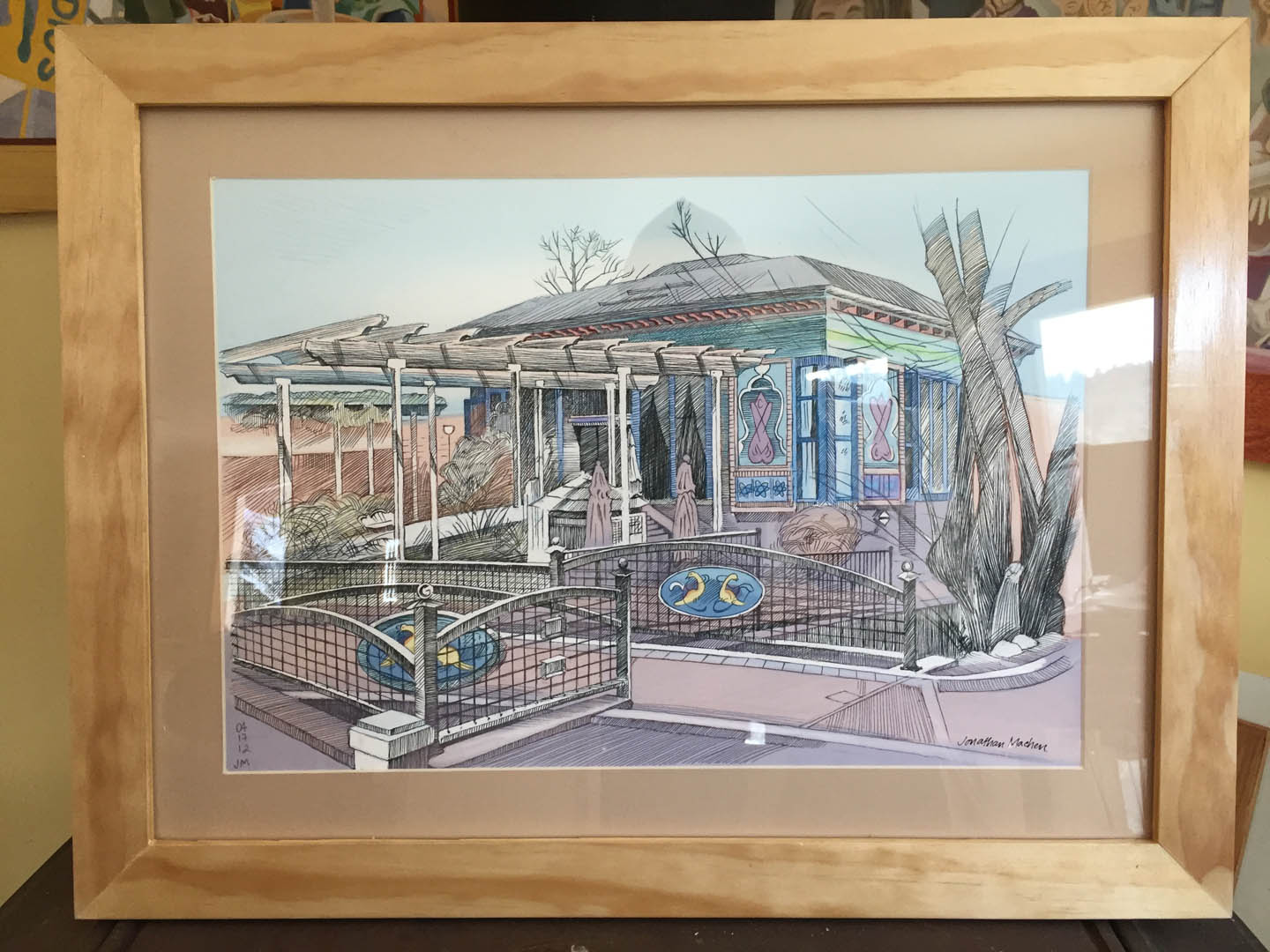 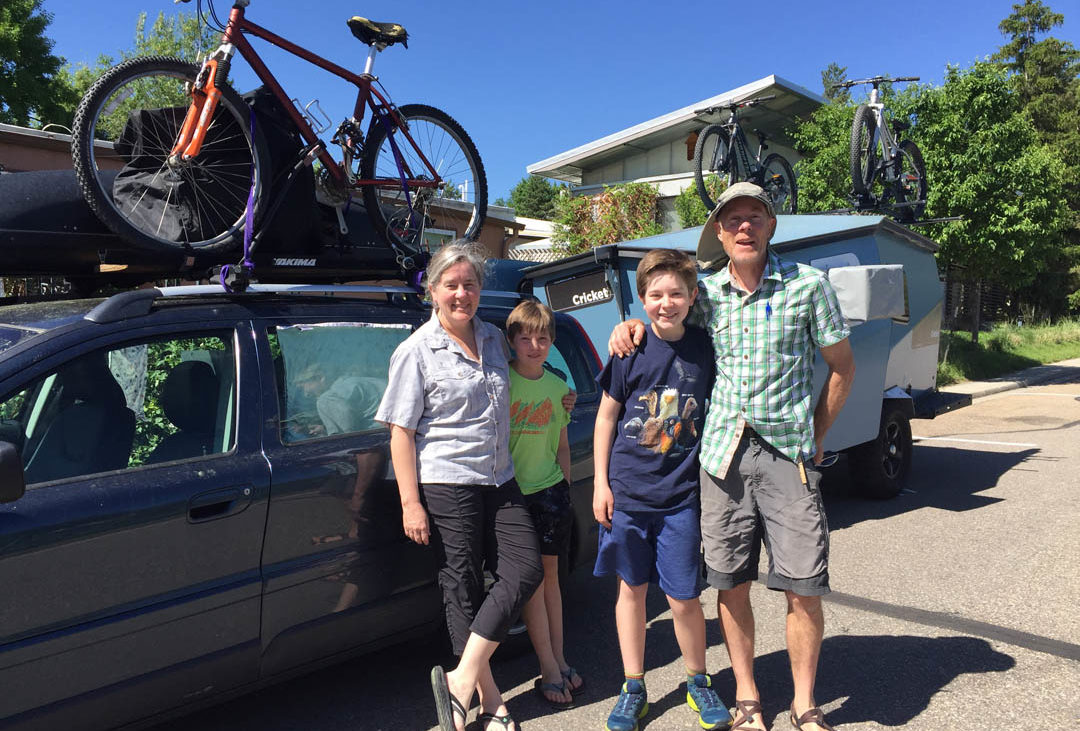 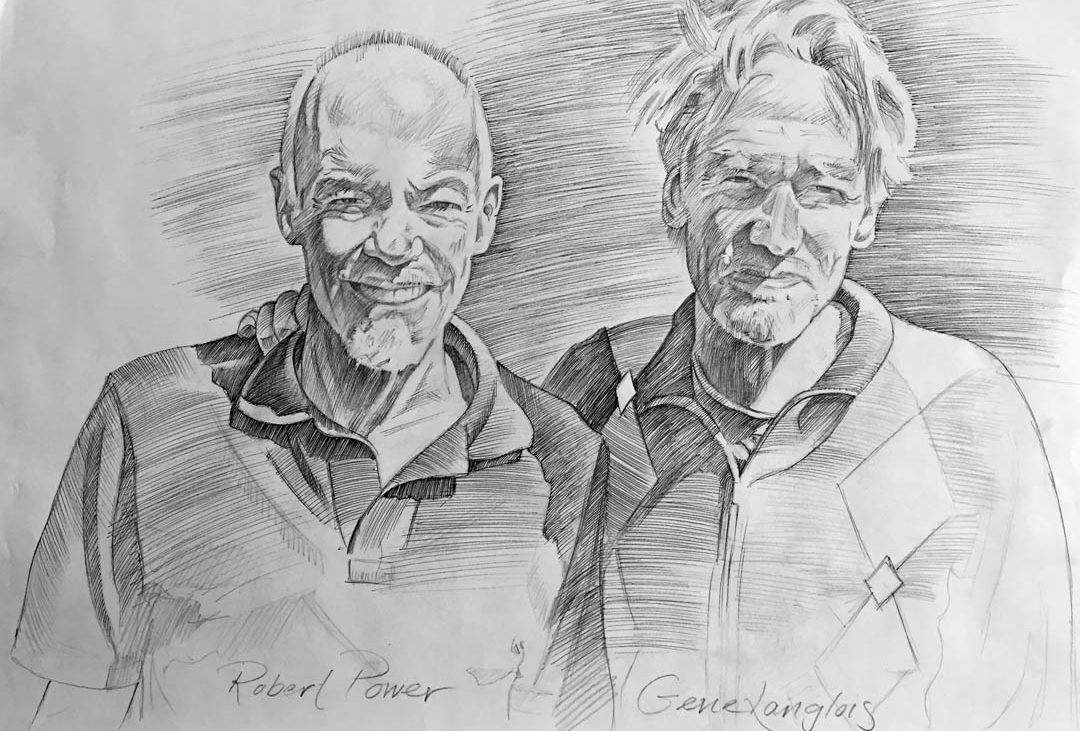 Fourmile Canyon is  calm, and sunlight streams through our living room windows.  The rats – reduced to one. I had to put down Orbit, one of our two pet rats, as he had a tumor that was increasing in size, and we did not feel comfortable leaving him in that condition with the Fox’s. So we buried Orbit in the evening, and took General up to Jenny Fox’s house, where he will spend the next eight weeks in the company of a Chinchilla and a Sugar Glider. Phoenix forgot the bedding, so we had to drive up there twice. He crafted two different ‘manuals for care’; one for General and one for our frogs, Turkey and Rooster, which we left up at Zeppelin Inoue’s house. The Inoue’s dog Pickles kept chomping on a squeaky toy as we put fresh water in the tank and introduced them to their new home.

Hummingbirds are flashing around the feeder. The lawn is mowed, the periphery of the house cleared of vegetation in case the lush growth from recent rains dries up and fire danger becomes a problem.  Peter MacGill and Cathee Courter are staying here while we are gone. It’s been a rush of cleaning and packing for the past few days as we are about to embark on a new style of travel – Cricket camping.

As we did last year, we made a stop in Boulder to say goodbye to Gene at his house. Robert Power was there with him, and we stood outside and showed them our travel rig, the Cricket with bikes on top attached to the Volvo, and took some photos, before saying goodbye and heading towards I-70. Before we even left Boulder’s city limits I had to pull the car over and adjust the straps on the bikes, since the wind seemed to be pushing them around too much. The kids immediately descended into their tablets, and we headed out of Boulder.

Goodbye to Boulder
On a Saturday in June
Heading to Kansas

Our covered wagon
Adorned with aluminum
Instead of canvas

Windmills crowd the plains
In eastern Colorado
Exploiting the breeze

We left the lemons
Swaying in kitchen basket:
Party for fruit flies

Windmills and Jesus
Rising above Kansas plains
Salvation in sight